After looking at the only urban planning work of Salvador Dali, I came out on Alcala Avenue, one of the main thoroughfares of the city, stretching from the center to the North-Eastern edge of the city. 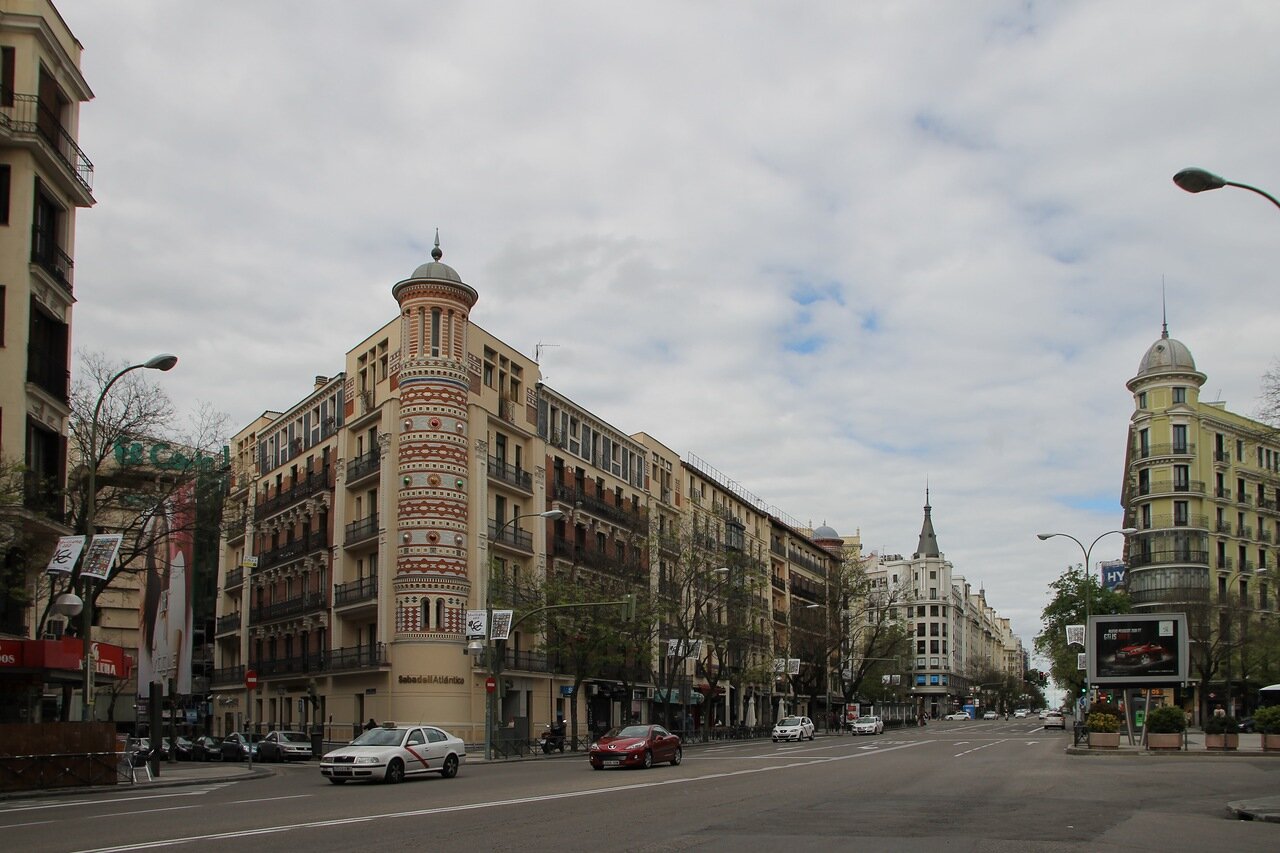 The street began to form at the beginning of the 15th century along the road leading to the East, towards Aragon. Droga was surrounded by olive trees, so the area was originally called "Olive grove". 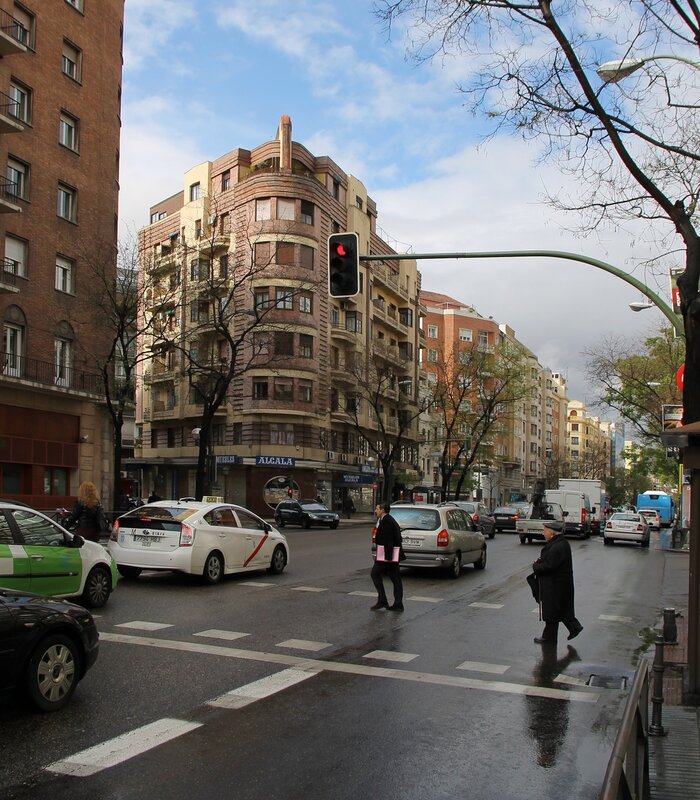 When the thicket settled bands of robbers who robbed passing people, Queen Isabella I solved this problem in a radical way - ordered to cut down the grove. Since then, the area has acquired the name Alcala, after the nearest town located on the road. In the 16th century, Madrid became the capital of Spain, the city began to grow rapidly, and the old Aragonese road eventually turned into a street. 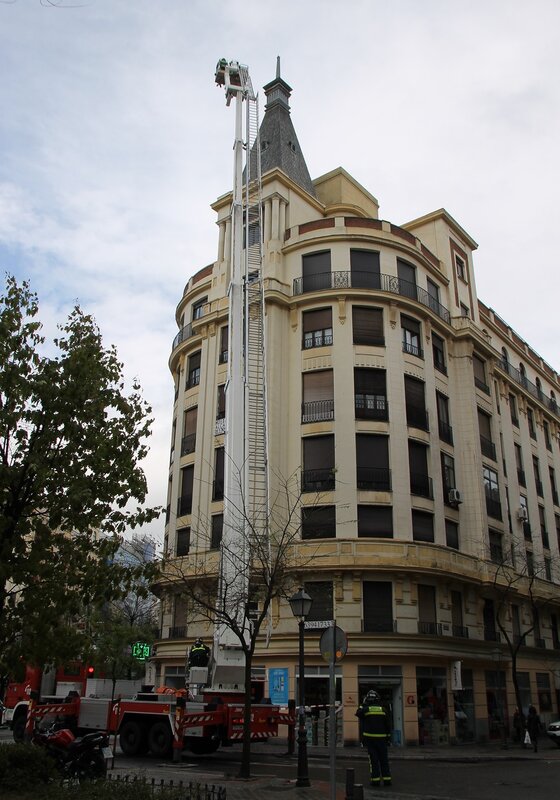 Madrid firefighters wash the numerous spires and turrets of buildings from pigeon products of life. Practical - both fighters training, and the city looks neater. I will not be lazy to say again that I have not yet seen a cleaner country than Spain. Although, according to surveys, the residents of Madrid themselves are not too happy with the cleanliness of the city's streets. 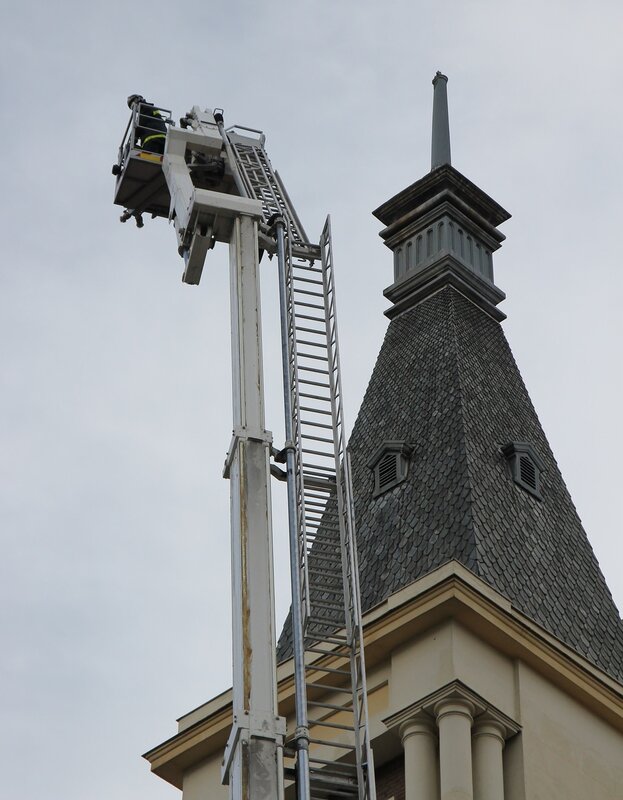 Behind the loud sign of the Museo de Jamon is an ordinary butcher shop, although distinguished by an exquisite assortment of traditional Spanish products. Here you can not only buy cured ham, but also taste a ham sandwich.

The building of Sabadell atlantico Bank is difficult to attribute to any style - there are also Moorish ornaments, modern metal plaques, and sgraffito. A similar style house I saw it in Barceloneta, one of the neighborhoods of Barcelona. 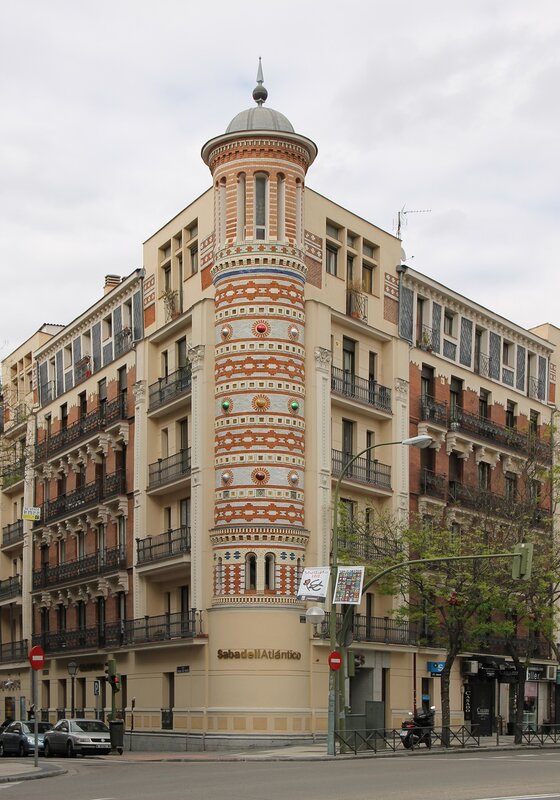 The new Alcala theatre (Nuevo Teatro Alcalá on the map it was designed by Luis Ferrero and opened on February 20, 1926. Originally, the hall was called Coliseo Pardiñas. In 1991, the theater was closed due to dilapidation and projects for its reconstruction and repurposing were hatched for a long time. Exactly ten years later, Argentine businessman Alejandro Romani purchased the building and began to restore it. On January 29, 2003, the curtain was raised for the first time for the show "Tanguera" in the renovated auditorium with a capacity of 1,300 people and named "New Alcala Theater". Now the musical "Jesus Christ Superstar"is constantly playing here. 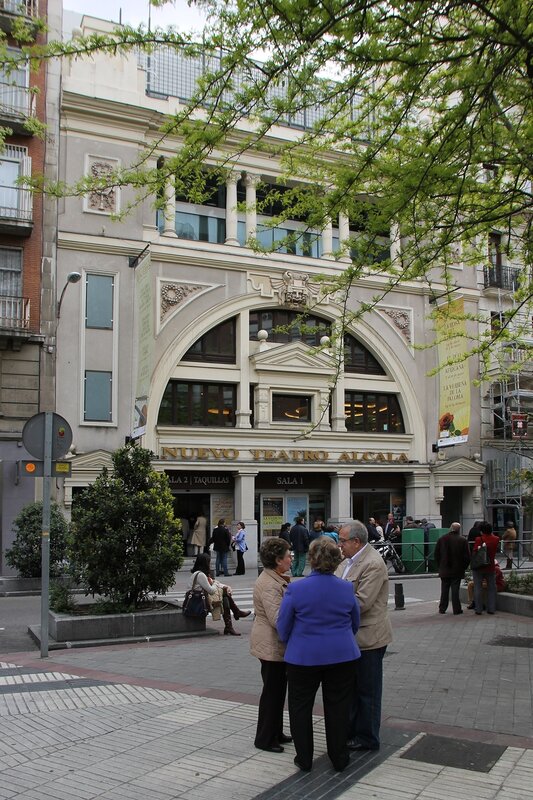 Bust of Francisco Goya, installed in front of the entrance to the metro station named after him. 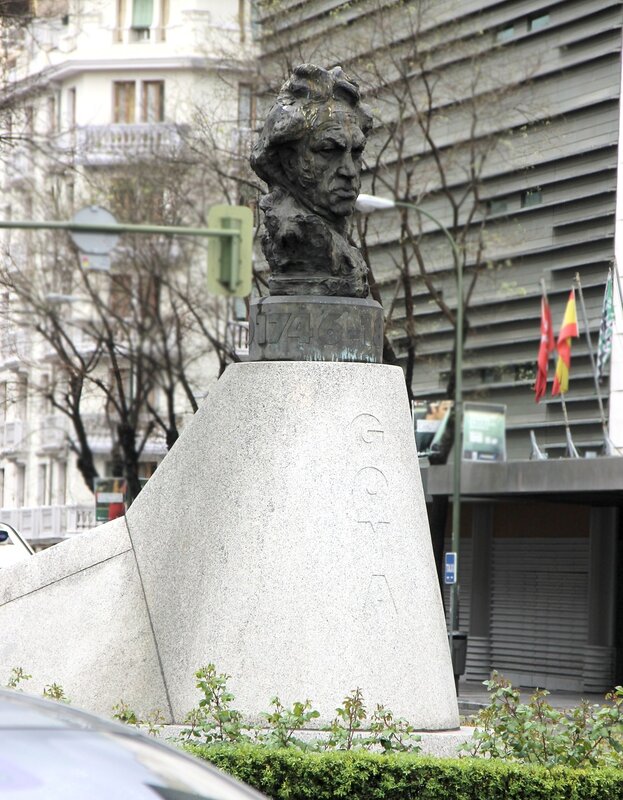 District Salmanca who cuts Alcala, considered the most prestigious in the city. The street is a continuous string of elegant buildings, the lower floors of which are occupied by expensive shops. 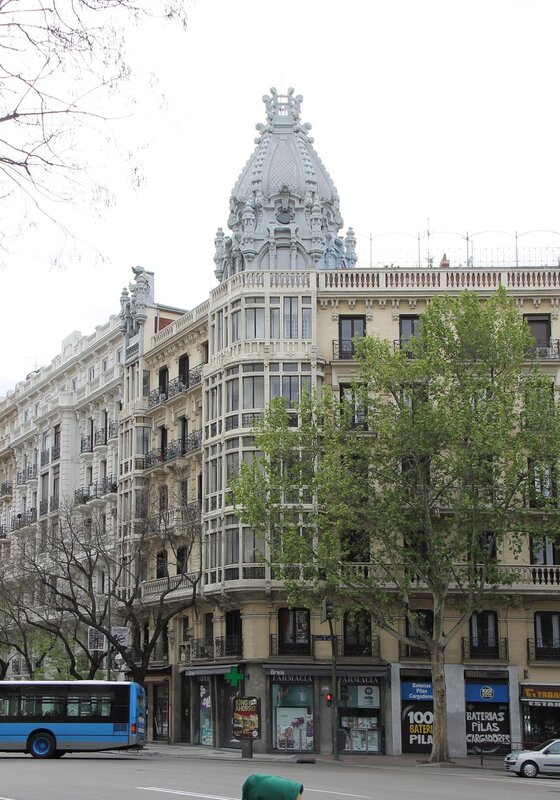 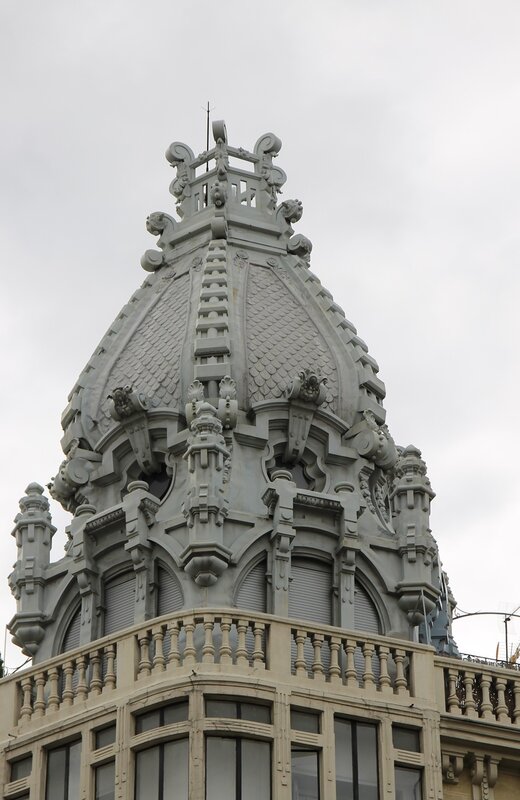 Now it is the longest street of the Spanish capital, its length is 10.5 kilometers. 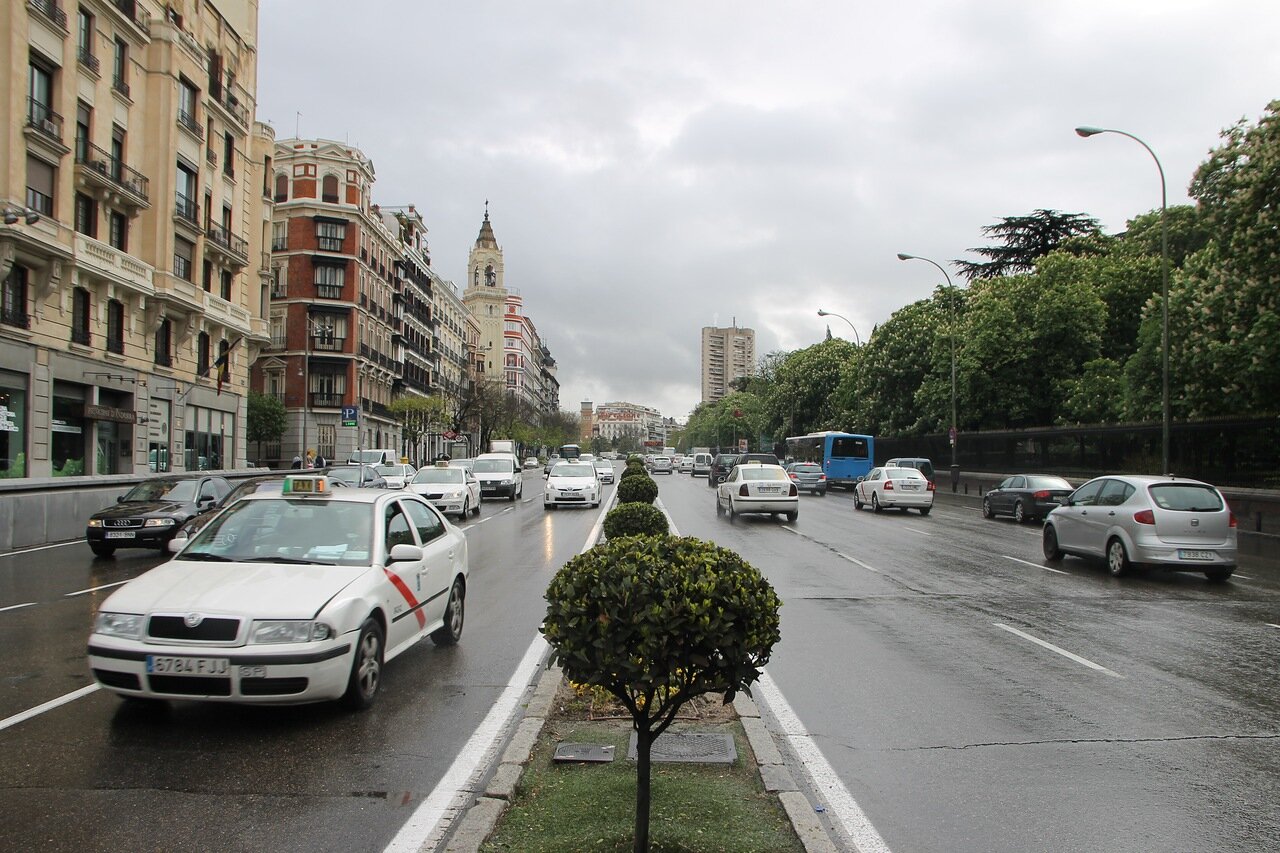